Set in a Parisian market, this hilarious one act operetta was commissioned by Glyndebourne for performance in the gardens throughout August. Marcia collaborated with librettist Stephen Plaice to produce a new version of Offenbach’s 1858 hit, directed by Stephen Langridge. The new version is entitled In the Market for Love or ‘Onions are Forever’.

Having previously worked with Stephen Plaice to produce Offenbach’s work in Bouffe!, Marcia was thrilled to be part of the creative team who are bringing Offenbach to Glyndebourne for the first time, as part of their artistic response to the challenges of COVID-19.

Here is an introduction to the occasion from Glyndebourne’s YouTube channel.

“There’s a thrown-together, on-the-hop feel to it – the set is clearly a raid on the company’s store house – but it’s a full staging, with first-rate singers and a small but polished…That’s several causes for celebration right there.”
The Guardian ****

“In the Market for Love is a slight, daft piece and the gamble of this “Covid” production by Stephen Langridge, with a new English libretto by Stephen Plaice, is that it pushes to the foreground the things that some of us might like to forget, at least for an hour: masks, visors, 1/2/3-metre rules, squirts of sanitiser.”
The Times ****

“With boisterous direction, and the whole cast romping cheerfully over Offenbach’s bouncy galops and flirtatious waltz songs, it’s surely the most fun any of us will have in the opera house for the foreseeable future, and a million times more helpful, right now, than the incoming tide of earnest new-music commissions about the trauma of lockdown.”
The Spectator

“Irrepressible energy, irreverent wit and a terrific ensemble performance bring some brightness into the prevailing gloom.”
The Stage ****

Marcia is a featured soloist in Orlando Gough’s recorded score for the startling and visceral new Staging Schiele by Shobana Jeyasingh, at the Queen Elizabeth Hall and on tour in the UK. Named on the Guardian’s Top 4 Dance Choices for Autumn 2019. Listen to a sample.

Collaborating with Stephen Plaice on a new singing translation of Rachmaninov’s The Bells, Marcia set the new text for a sensational première by the Guildhall Symphony Orchestra and Guildhall Symphony Chorus, conducted by Dominic Wheeler September 27th, 2019. Previously published with an English text based on the Russian translation, the new text attempts to bring the libretto closer to Poe’s original poem to revitalise this important work in modern performance.

Marcia creates the role of Cassie in Bloom Britannia, a new People’s Opera by Stephen Plaice and Orlando Gough for Barefoot Opera. The first act of the opera was performed at the De La Warr Pavilion in Bexhill in April 2019 to great acclaim. The full production will be mounted in October 2020. See a trailer for the opera here. 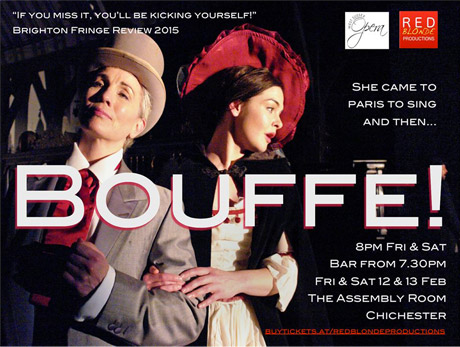 A new comic operetta based on the life of singer and courtesan, Hortense Scheider, with music by Offenbach, Donizetti, & Martini. Marcia portrays the Conférencier, Station Master, and three other roles.

Awarded 5 stars as a Highly Recommended show in the Brighton Fringe, Bouffe! was praised for its 'top quality singers' and 'highest standards of performance and musicality.' 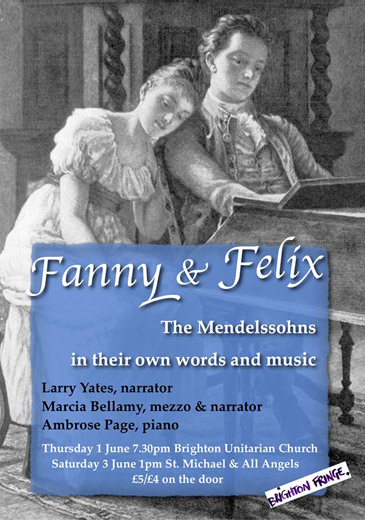 Fanny & Felix, in their own words and music

A portrait of ambition and artistic vision in a world that has different rules for daughters and sons.

Roz & Claire shared the same goals, the same training, the same shows, and even the same boyfriend at one point. Everything comes out on tour, right? A friendship unpacked, with the help of Monteverdi, Mozart, Lloyd Weber, Orlando Gough, and others.

Premièred in the 2013 Brighton Fringe, 2014 tour of East and West Sussex

Scroll back to top